Two members of the SuperNEMO collaboration have been honoured by the Institute of Physics for their outstanding contributions to experimental particle physics. The photo, from the IoP, shows them displaying their medals. 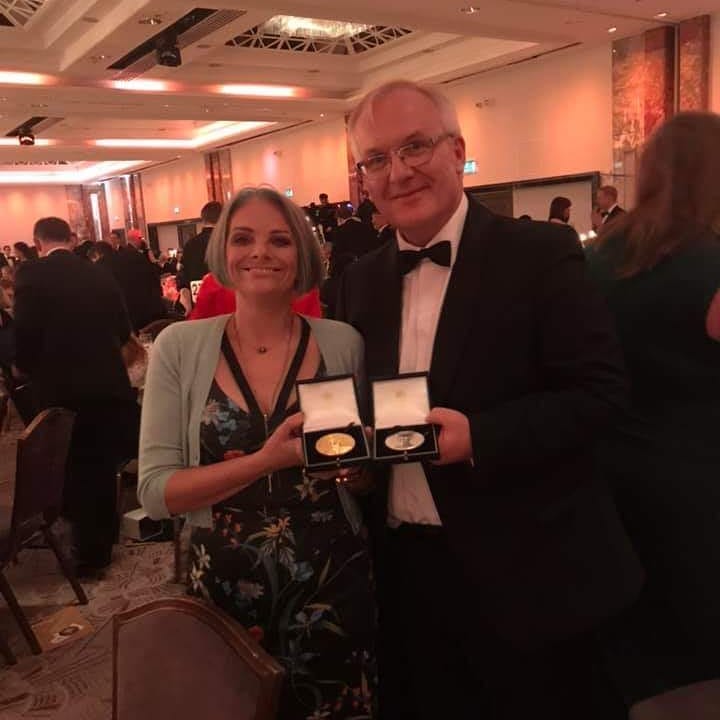 Professor Stefan Söldner-Rembold, of the University of Manchester, received the Chadwick medal and prize for his contributions to pioneering experimental work in high-energy particle physics and his international leadership in Higgs and neutrino physics. In addition to his work on SuperNEMO, Stefan is also spokesperson of the DUNE experiment, which will study neutrino oscillations in the world’s most intense neutrino beam, using a neutrino detector near the beam source at Fermi National Accelerator Laboratory in Batavia, Illinois and a second, much larger, detector at the Sanford Underground Research Laboratory in Lead, South Dakota.

Professor Jennifer Thomas, of University College London, was awarded the Michael Faraday Medal and Prize for her outstanding investigations into the physics of neutrino oscillations. A long-standing NEMO collaborator, Jenny is currently working on CHIPS (CHerenkov detectors In mine PitS) - a new concept in neutrino oscillation physics that aims to build megaton neutrino detectors cheaply and flexibly, by using the water in disused, flooded mine pits to generate Cherenkov light signals when neutrinos (from an accelerator beam) interact in the water. She also served as co-spokesperson of Fermilab’s long-running MINOS and MINOS+ neutrino oscillation experiments, and was honoured for her pioneering work and leadership in these experiments.