The SuperNEMO detector is one step closer to completion, as we ramp up our final construction efforts ready for data-taking later this year. 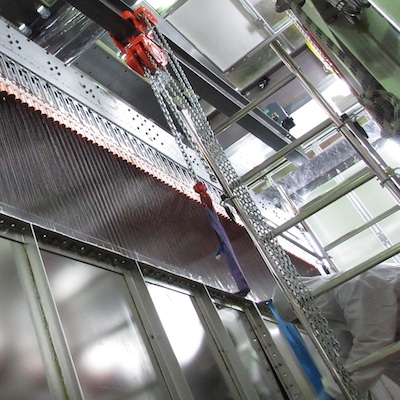 With the help of physicists from UCL and the University of Manchester, engineers from UCL’s Mullard Space Science Laboratory have removed the gas-seal plates protecting the French-side half of the tracker. This will allow us to proceed to the next phase of construction, when a team from the University of Texas at Austin will work on installing the frame from which we will hang our double-beta decay source foils.

Taking off the gas-seal plates was a nerve-wracking operation, with hundreds of bolts having to be removed before using a crane to gently lower the three six-metre-long steel plates to ground level, in the narrow space between the two halves of the detector, without touching the delicate tracker wires. 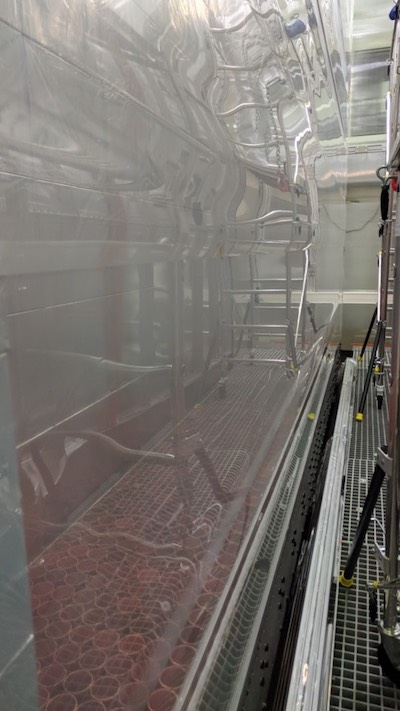 The plates were then passed out through a specially-cut slot in the wall of the clean tent.

When the plates had been safely removed, the team were rewarded with the first ever view of the inside of the tracker, with its array of fine tracking and field-shaping wires, backed by the scintillator blocks of the calorimeter wall. After inspecting to ensure that all wires were in good condition, and checking the alignment of the columns of tracker cells, the tracker was protected by taping a temporary Mylar cover across the exposed face. This will ensure that the ultra-clean tracker remains dust-free as we await the upcoming installation of the source frame. 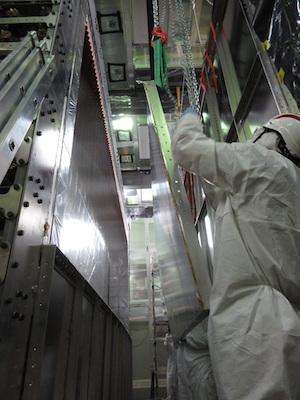