SuperNEMO has taken an important step towards becoming fully operational, as our selenium source foils were installed in the detector this week.

Andrea Jeremie, Jean-Marc Dubois and Eric Chabanne of the Laboratoire d’Annecy le Vieux de Physique des Particules in Annecy, France did a fantastic job of hanging our 36 source foils from the frame connected to one of our wire trackers. We will now be able to attach the other half the tracker system, and the final calorimeter wall, closing the detector for the first time! 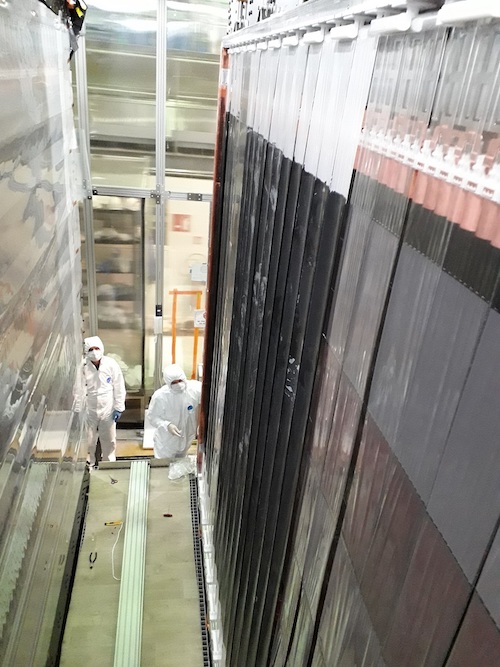 The source foils are the heart of the SuperNEMO experiment, as they contain our double-beta decaying isotope, selenium 82. The foils are very thin - just a fraction of a millimeter - and are formed of enriched selenium crushed into a powder, mixed with PVA, and sandwiched between Mylar sheets. As it is important that we have a very clean and readiopure detector, the selenium was purified by teams at Tomsk and Dubna in Russia, to remove contamination from naturally-occurring beta-decaying elements. In total, we have 34 selenium foils, plus two radiopure copper foils to use as a control. Some of the foils were produced at LAPP, while others were made at the Institute for Theoretical and Experimental Physics in Moscow, Russia.

Congratulations to the LAPP team for this huge milestone, and to everyone who worked so hard to produce the source foils.